Climb The Mountains of God’s Mysteries 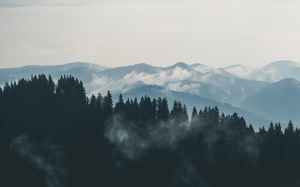 I have read writers and heard speakers who try to turn our ignorance about God’s ways into the main ground for our amazement and worship. They usually do so by using the positive word mystery to refer to the depths and heights of God so that we are supposed to be moved with wonder and awe at how much we do not know about God.

Your admiration and wonder at a mountain range might be based on your glimpse from the foothills, where you see the range rise and disappear into low-lying clouds. Or it might be based on years of expeditions into the mountain range only to discover that every time you reach the top of one unimaginably high peak, another entire range of mountains soars before you and above you.

It is no great honor to God to spend your life in the foothills, writing essays and poems about how much you don’t know above the cloud line. Far better to let God put your hand into the hand of Paul — or any of his other inspired writers — and then spend a lifetime climbing with him on the high paths of revelation.

One of the most misunderstood and misused passages in Paul’s writings is the great climactic section at the end of Romans 1–11:

Oh, the depth of the riches and wisdom and knowledge of God! How unsearchable are his judgments and how inscrutable his ways!

“For who has known the mind of the Lord,
or who has been his counselor?”
“Or who has given a gift to him
that he might be repaid?”

Here’s the key observation: Paul does not write this soaring admiration of God’s riches instead of revealing those riches, but because he had just laid out those riches in eleven chapters of mind-boggling revelation. He soars because of what he had just unveiled, not because of all that remained veiled. These words of amazement come at the end of eleven chapters in which Paul has taken us into the depths and heights of God’s ways beyond what any of us thought possible.

Just reading the preceding three verses boggles the mind about God’s ways. Not because they are behind a cloud of unknowing, but because they are revealed as utterly unexpected and counter-intuitive and shocking and God-exalting. Paul sums up God’s plans for Jews and Gentiles:

For just as you [Gentiles] were at one time disobedient to God but now have received mercy because of their [Jewish] disobedience, so they too have now been disobedient in order that by the mercy shown to you they also may now receive mercy. For God has consigned all to disobedience, that he may have mercy on all. (Romans 11:30–32)

Take five minutes to reflect on those verses, and you come away at first dazed, and then amazed, not because you are left in the dark, but because the light is so dazzling you can scarcely believe what you are seeing.

“Unsearchable” but Brought to Light

Paul describes his revelation of God’s ways as unsearchable one other time. And the point is not that he leaves us in the foothills without knowledge.

To me, though I am the very least of all the saints, this grace was given, to preach to the Gentiles the unsearchable riches of Christ, and to bring to light for everyone what is the plan of the mystery hidden for ages in God, who created all things. (Ephesians 3:8–9)

This text does not mean, “Sorry, folks, the riches of Christ are in the darkness of mystery, and they can’t be revealed.” The text says the opposite: “God called me,” Paul says, “and gifted me to bring the mystery to light! The things I write about Christ are the unsearchable riches of Christ!”

They are unsearchable in three senses: (1) They have been “hidden for ages in God” — but no more! (2) They can be known only by divine revelation, not mere human wisdom — and Paul is writing that revelation. (3) There will always be more to see as you climb into the meaning of inspired revelation, and then into the Himalayas of heaven.

To Know What Surpasses Knowledge

This last point is confirmed in Paul’s prayer in the next chapter of Ephesians. He prays that we

may have strength to comprehend with all the saints what is the breadth and length and height and depth, and to know the love of Christ that surpasses knowledge, that you may be filled with all the fullness of God. (Ephesians 3:18–19)

This is it! Because of God’s stunning revelation of his ways in Christ — through the writings of the apostle Paul — we are granted “to know the love of Christ that surpasses knowledge.” We are taken higher and higher into the mountain ranges of God’s wonders so that we really know what was unknowable, only to find that the mountains rise ever higher.

Paul was not one of those people who is content to live in the foothills of revelation, waxing eloquent about the value of “mystery” above the low-lying clouds. Paul knew that God gave him a calling not to hide, but to preach “the unsearchable riches of Christ.”

Paul knew that God is honored not when we linger in the valley, endlessly extolling the value of unexplored mystery. God is honored when we accept his invitation to lead us into his unsearchable judgments and inscrutable ways — when we treat the authors of Scripture like sure-footed Sherpas in the Himalayas of God’s revelation.

This site uses Akismet to reduce spam. Learn how your comment data is processed.

Let There Be Light Archives